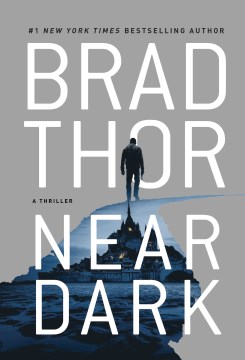 "The world's largest bounty has just been placed upon America's top spy. His only hope for survival is to outwit, outrun, and outlast his enemies long enough to get to the truth. But for Scot Harvath to accomplish his most dangerous mission ever - one that has already claimed the lives of the people closest to him, including his new wife--he's going to need help--a lot of it. Not knowing whom he can trust, Harvath finds an unlikely ally in Norwegian intelligence operative Sølvi Kolstad. Just as smart, just as deadly, and just as determined, she not only has the skills, but also the broken, troubled past to match Harvath's own"--Publisher description.
Publisher: Waterville, ME :, Thorndike Press, a part of Gale, a Cengage Company,, 2020
Edition: Large print edition
Copyright Date: ©2020
ISBN: 9781432880514
1432880519

Great read -- holds your attention. The very end was predictable but, other than that, it keeps you turning pages. I look forward to reading more books by this author

Like a very well-built amusement park ride, predictable thrills that roll along from the opening pages.

After a few weeks of “experimental” reading excursions, meaning “new to me writers”, I returned to one of my tried and true authors, BRAD THOR. Book number 20 in his Scot Harvath series is NEAR DARK. What a terrific writer of spy thrillers! Thanks for the great entertainment.

In this story, which picks up right after book 19 (BACKLASH), Scot is suffering from a horrific personal loss. He has retreated to a luxury resort near Key West in southern Florida in the United States. He is drinking alcoholic beverages like there is no tomorrow. That is no exaggeration. If you read BACKLASH, you can understand his mental state. If you have not read the previous story, you probably should do so before you start this one.

Harvath works for a private intelligence gathering company after many years of government employment including the U.S. Navy SEALS, the U.S. Secret Service and the C.I.A. As the story unfolds, Scot is drinking in a dive bar in Key West when two bums start to harass the female bartender. That action upsets Scot and he invites them “to step outside” with him. They do. A fight breaks out. A third man shows up with a gun and is about to shoot Harvath. A shot rings out. The would be gunman collapses. Dead. Scot’s team of Haney, Staelin, Palmer and Ashby have come to the rescue. They are there because it has come to his company’s attention that a contract for $100 million has been issued for Harvath’s death.

His team also informs Scot that his good friend Carl Pedersen of the Norwegian Intelligence Service (NIS) has been tortured and killed. Carl had worked with Scot on a couple of cases. This is another blow to his collapsing psyche. Scot flies to Norway on a company jet where he meets Solvi Kostad an N.I.S. officer who was also close to Pedersen. The two team up together to find out who tortured/killed Carl and to find out who is trying to kill Scot.

There are plenty of suspects including Filip Landsbergis, a high-ranking member of Lithuania’s State Security Department (VSI), who has also worked with Scot. Nikolai Nekrasov is a billionaire Russian oligarch who lives in southern France near Nice who has a grudge against Harvath. Andriejus Simulik head of VIS is another suspect. Paul Aubertin, born Michael Collins McElhone in Ireland, is a former French Foreign Legion operative, and is now a paid assassin.

As mentioned earlier Harvath’s journey takes him to Key West and then to Boston, Oslo, Lake Garda (Italy), Lithuania and Mont St. Michel near Normandy (France). As typical of Brad Thor stories, there is plenty of action with a hint of romance. The book is fast paced and should be a quick read for most readers. This a perfect read for those people who have quarantined themselves during COVID 19 Pandemic. HIGHLY RECOMMENDED!

Excellent!!! I love this book!! Emotional yet full of suspense.

Brad Thor's NEAR DARK is another engaging novel with lots of interesting twists and turns as
Scot Harvath tries to find out who has put a $100 million dollar bounty on his head. And to make it more intriguing, whoever did, opened the door for any assassin who took him out, instead of the usual hire one guy to do the job. First one to kill him gets the bounty. Throw in an intelligence agent from Norway, and it's a fun read.

Thor getting bored writing these? not a great effort

'Near Dark' is aptly named.

Scot Harvath came awfully close to the edge of complete darkness in 'Near Dark'. After the devastating events of 'Backlash' Harvath is, quite simply, a wreck:

"He could sense that he had tipped over the rim, that he was falling into the blackness of the abyss."

The difference with 'Near Dark' is that for Scot, this time is not about defending his country or protecting allies, it's about protecting those he loves and self-preservation. It's simply, glaringly, about avenging those he couldn't protect and consoling his grief, his helplessness, his anger with revenge. It's a bit jarring that those above him know and quietly sanction what he's doing.

There's a lot of backwards looking in 'Near Dark' as well as much recap of common stagecraft we've learned from Scot over the years, so sometimes it reads slowly. Other times the action is lightning and brutal. We can almost see the pieces of the puzzle Scot must solve as a line of dominoes slowly falling. However, I'm not sure what the unfinished end, the teetering but not fallen last domino means. It was odd and unScotlike.

We see a glimmer of hope for Scott in his latest partner, Sølvi Kolstad, but just as that is too easily predictable, the fact is they are both very good at what they do and they are both equally damaged.

"We all have our crosses to bear. What's more, we wouldn't trade ours for someone else's. If you and ten other people walked into a room and all laid their crosses on the table, everyone would be walking out with the same cross they walked in with."
"He supposed that was because we get used to ours, but it was more than that. Our cross, we realize, helps define who we are. How we wrestled with our problems, how we battled the demons that often accompanied them, was what built character. And as much as her straight-forwardness had unsettled him, it was good to have that reminder."

The question going forward is how will Scot Harvath be defined? By his losses or by his strengths?

From a star of the American spy thriller genre.