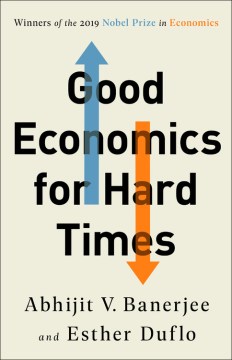 "Figuring out how to deal with today's critical economic problems is perhaps the great challenge of our time. Much greater than space travel or perhaps even the next revolutionary medical breakthrough, what is at stake is the whole idea of the good life as we have known it. Immigration and inequality, globalization and technological disruption, slowing growth and accelerating climate change--these are sources of great anxiety across the world ... The resources to address these challenges are there--what we lack are ideas that will help us jump the wall of disagreement and distrust that divides us. If we succeed, history will remember our era with gratitude; if we fail, the potential losses are incalculable. In this ... book, renowned MIT economists Abhijit V. Banerjee and Esther Duflo take on this challenge."--Publisher's description.
Publisher: New York :, PublicAffairs,, 2019
Edition: First edition
Copyright Date: ©2019
ISBN: 9781610399500
1610399501

Despite knowing the political leanings of the author, I decided to read it in an unbiased way owing to its Nobel credentials. My thoughts after reading it pretty thoroughly are definitely mixed. The name doesn't make much sense as the book barely gives opinions about what is right or wrong, which is great because I believe presenting the reader with facts, examples, and surveys, and letting her/him frame an opinion on their own is the best approach, even for the works of non-fiction.
The book is jam-packed with stories of non-trivial economic experiments, and touches almost all the relevant topics of the day. Every page highlights a survey, introduces the reader to an economic concept ranging from Keynesian to those of Friedman, and every chapter touches upon a highly relevant topic and collects stories about it from around the globe and across centuries. Except for biased opinions at some places, it is truly amazing to read all the stories, and also makes the reader wonder about the vast gamut of economic policies that the authors are experts in! Yet, the book doesn't come across as highly technical, certainly doesn't read like it was written by Nobel laureates, and has a very easy-flowing vibe.

Some of the very interesting concepts mentioned in the book include Iceland's volcanic eruption compensation, the story of Bangladesh's Mongo people refusing to migrate simply because of their ignorance in that matter, David Card's kind of flawed theory of Mariel Boatlift, the super interesting story of Czech immigrants in Germany who worked in Germany but spent in their home country thereby impacting German economy negatively, the thought-provoking observation of slowing down of mechanization due to immigration as seen with Mexican Braceros, SF Mission District's Yuppie evacuation project, Stan Ulan's challenge and the response of Comparative Advantage (which kind of made me happy to know China can't be the world's supplier of everything if this theory is true), the butterfly effect's demonstration of how 1990's Iraq-Kuwait war increased oil prices leading to the economic liberalization of India, the stories about the woes of Indian software industries, the Kenyan rose market, specialized cities in China for making highly specific products like socks (Zhili cluster), Uttar Pradesh's caste cricket league experiment, spillovers - the mystery of Silicon Valley, Kigali experiment on HFCs, aging population of Japan, and that of China due to One Child policy, Delhi crop burning problem and potential solutions, Leicester City FC's mindblowing 2016 season etc.

Owing to one author who was raised partly in India, there are a plethora of stories related to India. The only thing missing in the book in my opinion are the economic booms (Miracle on the Rhine, on the Moon river etc). Other than that, the book talks about practically every problem the world is facing today, from an economic perspective, like Global Warming, Stock Options and their influence in American finance, taxation, immigration, the role of economists themselves etc.

Overall, although I do believe that a majority of the statements mentioned in the book can be countered, sometimes solidly, the book still comes across as a very thorough attempt at explaining relevant economic concepts and problems by two highly knowledgeable people, for which alone it is entirely worth reading!