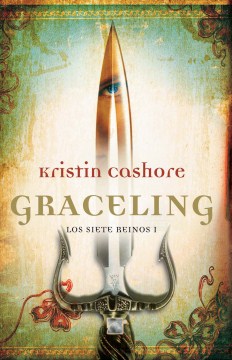 In a world where some people are born with extreme and often-feared skills called Graces, Katsa struggles for redemption from her own horrifying Grace, the Grace of killing, and teams up with another young fighter to save their land from a corrupt king.
Publisher: Orlando, FL :, Harcourt,, 2008
ISBN: 9788499181004
Characteristics: 1 online resource text file,rda
Additional Contributors: OverDrive, Inc. - Distributor

Graceling by Kristin Cashore is the first romance/adventure book of a three-part series. It follows the main protagonist, Katsa, and her companions through an action-packed, romance-driven adventure. This first book is a great introductory to the series by Kristin Cashore. Filled with memorable characters - I read this book seven years ago and still remember them vividly - and an exciting plot with dense secrets to theorize and explore. She meets another Graced character by the name of Po. The romance between them is refreshing and adequately developed. I personally think the romance coupled with the action is what makes this book fantastic. Loved this novel, and I was enticed during the entire read. Overall, this novel is a great introductory to the romance adventure genre and is a definite read for those already familiar with it. 4.5/5 stars @ojke of the Hamilton Public Library's Teen Review Board

Graceling by Kristin Cashore (the first book in Graceling series) is a great book about adventure and fantasy. The main character is a young adult named Katsa. She lives in a world where there are two types of people: gracelings and commoners. Gracelings are people who have two different colored eyes and are extremely talented at something. Katsa (18) is the niece of a king named Randa and works for him as a thug. People are scared of her and misjudge her intentions. She believes in freedom and equality, yet is forced to intimidate. Soon she meets a mysterious young man from another kingdom. They get to know each other and trust becomes a key ingredient in their relationship. Many discoveries are made along this journey.

I really love this book. There are so many details that give the reader the feeling of knowing the characters. There are also many surprises along the way that keep the reader aching to know more. Feelings and moods are well described and portrayed. The sequels to Graceling are equally interesting and fun to read.
I highly recommend this book to anyone who likes fantasy, romance, and/or adventure. - Anya, Grade 9

Katsa can kill that is her graceling power. Because of this gift she is used by men in power to kill those that oppose them. She creates fear among men. Katsa desperately wants to escape this life but that is easier said than done. Enter Prince Po. This is a fantasy love story with a really bada** lead. I was disappointed when I realized it was a standalone. Though there are other entries into the graceling realm they are not related. I had trouble getting into the others. Maybe I will try again now that the initial disappoint has worn off.

Graces are supernatural gifts and Katsa's Grace has made her capable of killing a grown man with her bare hands since she was a child. She's used to being used, and feared, until she meets Prince Po, and everything changes. A brilliant read, full of action and adventure and just a sprinkling of romance (Katsa and Po for life!).

This YA book has it all! Intrigue, a strong female lead, high fantasy, assassins, court intrigue, magic, romance, excellent world-building, adventure, you name it. In this world, there are people who are born with special powers, called Gracelings, and Katsa's Grace is killing. She has spent the majority of her life chafing under the thumb of her uncle, who is king of the realm, but discovers that maybe she isn't the monster she thought she was.

Hands down one of my favorite books I've ever read. I read this back in 2009 and now, a decade later, I can say it's solidly in my top 10 still.

Graceling felt like half-finished book. The storyline and characters were average and there was too much romance, its basically 1/2 romance and 1/2 interesting. Did not like the cliche near the end of katsa's and Po journey. The book is too simple when it came to defeating the villian. Otherwise, Katsa as a kid is halarious and Po is the best guy character... although after reading this book felt like he only liked Katsa becuase she was pretty. Also, this story would have been a lot better if it was written in multiple perspectives, ex. Po and Katsa.

In Katsa's world some people are born with a gift known as a grace. Every grace is different and Katsa has been blessed and burdened with a grace for killing.

Fantasy and romance mixed together with a pretty even blend of each. One of my all-time favorites.

There are 3 books in the Graceling Realm, but they don't read like a standard trilogy. I highly recommend reading them all and in order but you don’t have to.

blue_deer_398 thinks this title is suitable for 17 years and over

blue_eagle_2085 thinks this title is suitable for 13 years and over

edbodnar thinks this title is suitable for 14 years and over

RobertELPL thinks this title is suitable for 15 years and over

oona_laluna thinks this title is suitable for 11 years and over

Borealis7 thinks this title is suitable for 13 years and over

blue_dog_8329 thinks this title is suitable for 11 years and over

ADWithrow thinks this title is suitable for 12 years and over

BostonPL_JordanD thinks this title is suitable for 12 years and over

Or even better, wait until all your children are older and give my name to whichever is the most troublesome and obstinate.

"It seems better to me for a child to have these skills and never use them, than not have them and one day need them," she said.

Of course, if Po were here their difficulty of disguise would be multiplied manyfold; between his eyes and the rings in his ears, and his accent, and even his manner of carrying himself, he would need to wear a sack over his head to avoid drawing attention.

They sat together companionably, the child and the lion killer, listening to the wind that drove the snow outside their mountain cave.

"It humbles me. But it doesn't humiliate me."

He laughed. "I know you're teasing me. And you should know I'm not easily humiliated. You may hunt for my food, and pound me every time we fight, and protect me when we're attacked, if you like. I'll thank you for it."

"Your brothers are the foolish ones," Tealiff said, "for not seeing the strength in beautiful things..."

They would assume she was a boy, because in her plain trousers and hood she looked like one, and because when people were attacked it never occurred to anyone that it might have been a girl.

She cried like a person whose heart is broken and wondered how, when two people loved each other, there could be such a broken heart.

Katsa, Graced with killing, is King Randa of the Middluns' pawn. She punishes anyone who disobeys the king. But she is tired of being a pawn, and when Tealiff, a Lienid prince, is mysteriously captured by King Murgon of Sunder, she realizes she may need the help of the young Lienid, Prince Po, to free herself from the king and figure out the mystery.

This book is set in a fantasy land, where there are people who are given special powers, recognizable by their two differently colored eyes. Graceling introduces you to Katsa, a young girl Graced with killing, who is used as a pawn by her uncle to kill and torture his enemies. When she meets Prince Po, Graced with fighting, it seems she's met someone who can match her skills. Now, things are just getting interesting. Join Katsa and Po on an epic adventure with a whole cast of memorable characters!

Katsa is born with two different coloured eyes. What does this mean for her future in the Seven Kingdoms? Katsa is battling enemies, herself and her feelings towards a new person in her life while she tries to save Tealiff from Lienid.

Katsa is Graced in the worst way possible. Born into a world where having two different colored eyes means that you are exceptionally gifted, or Graced, Katsa has spent her life navigating the Kings court to stay alive. This is made much more difficult because the King happens to be her uncle and she is Graced in killing. After being used as an enforcer since she was young, Katsa's path becomes more complicated when she meets a foreign Prince who ignites a fire in Katsa to fight back.

Graceling takes place in a fantasy world in which certain individuals are born with a "Grace"--a special talent or ability. Gracelings are identifiable by their eyes, which are two different colors. This story centers around a Graceling named Katsa, a teenage girl Graced with the gift of killing. Once her uncle, the nefarious King Randa, discovers her Grace, he uses her as his personal assassin. As you can imagine, all this killing and lack of freedom has made Katsa a bit jaded. Katsa joins forces with another Graceling, Prince Po, and the two of them set out on a journey to discover who kidnapped Po's grandfather. On the way, Katsa discovers new things about herself and about her Grace.

Katsa has a Grace - a special talent - but of all possible ones, hers is killing. Up until now, she has been used as a thug by her uncle, the king. Yet when she meets a mysterious graceling whose fighting skill matches hers, Katsa begins to realize her true Grace.

From the inside flap:
In a world where people born with an extreme skill, called a Grace, are feared and exploited, Katsa carries the burden of a skill even she despises: the Grace of killing. She lives under the command of her uncle Randa, King of the Middluns, and is expected to execute his dirty work, punishing and torturing anyone who displeases him.
When she first meets Prince Po, who is Graced with combat skill, Katsa has no hint of how her life is about to change.
She never expects to become Po's friend.
She never expects to learn a new truth about her own Grace- or about a terrible secret that lies hidden far away... a secret that could destroy all seven kingdoms with words alone.

Sexual Content: The main character has sex and is not married

Sexual Content: The protagonist has sex with her boyfriend in this novel. It's not described in great detail, but it's described enough that I'd be uncomfortable giving this book to tweens and younger teens. It's unfortunate-- it's such a great book, and appropriate for younger audiences except for two short sex scenes.

Other: TO COUGES thank you for your warning i appreciate it a lot

Sexual Content: Ace_E360 SHUT YOUR MOUTH!! unless Katsa and Po are married their sleeping together is wrong and should not be promoted in any book. if someone wishes to warn others on that fact they have the right to do so!

Sexual Content: Couges: News flash: Katsa and Po are very committed, and the book presents marriage as being unsuited for the temperament of the characters. Nowhere does it promote marriage in general as undesirable. Also, (and here's the real news flash) life is riddled with pre-marital sex, and marriage is unnecessary. So I don't really see what you're complaining about.

Sexual Content: This book is riddled with pre-marital sex, celebrates non-commital relationships and promotes marriage as undesirable and unneccesary.