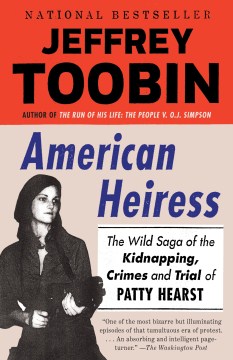 The Wild Saga of the Kidnapping, Crimes and Trial of Patty Hearst

From&#160;New Yorker&#160;staff writer and bestselling author of&#160;The Nine&#160;and&#160;The Run of His Life: The People v. O. J. Simpson, the definitive account of the kidnapping and trial that defined an insane era in American history

On February 4, 1974, Patty Hearst, a sophomore in college and heiress to the Hearst Family fortune, was kidnapped by a ragtag group of self-styled revolutionaries calling itself the Symbonese Liberation Army. The weird turns that followed in this already sensational take are truly astonishing--the Hearst family tried to secure Patty's release by feeding the people of Oakland and San Francisco for free; bank security cameras captured "Tania" wielding a machine gun during a roberry; the LAPD engaged in the largest police shoot-out in American history; the first breaking news event was broadcast live on telelvision stations across the country; and then there was Patty's circuslike trial, filled with theatrical courtroom confrontations and a dramatic last-minute reversal, after which the term "Stockholm syndrome" entered the lexicon.&#160;

Ultimately, the saga highlighted a decade in which America seemed to be suffering a collective nervous breakdown. American Heiress&#160;portrays the electrifying lunacy of the time and the toxic mic of sex, politics, and violence that swept up Patty Hearst and captivated the nation.

Baker & Taylor
An account of the sensational 1974 kidnapping and trial of Patty Hearst describes the efforts of her family to secure her release, Hearst's baffling participation in a bank robbery and the psychological insights that prompted modern understandings about Stockholm syndrome.

Baker
& Taylor
An account of the sensational 1974 kidnapping and trial of Patty Hearst describes the efforts of her family to secure her release, Hearst's baffling participation in a bank robbery, and the psychological insights that prompted modern understandings aboutStockholm syndrome.

The story of the kidnapping of Patty Hearst by members of the Symbionese Liberation Army, her conversion by them to their underground urban guerrilla radicalism, her participation in bankrobbing and bomb making, her capture, trial, conviction, and then subsequent sentence commutation and release is, indeed, one of the wilder sagas of a wild time in U.S. history. Toobin tells it well -- with compelling pacing and detail.

Yet none of his research or analysis has turned up really new facts or challenged the finding of the legal process about his central question: Was Hearst a willing participant in the SLA's crimes or did she fake this for over a year to keep from being killed -- as she claimed unsuccessfully in her trial? Toobin concludes that Hearst was a real kidnap victim, became a willing and sincere SLA member, continued this loyalty immediately after arrest, and only adopted the story of continuous coercion when forming her criminal defense strategy. Toobin's saga, though "wild" and detailed, actually sticks to the already established public narrative.

Toobin's interpretation of the available evidence is probably correct, but it still leaves Hearst's motivations and decisions almost inexplicable. That he fails to convey what her mental journey felt like to her is understandable since Patty Hearst refused Toobin any interview or other communication. He regards Hearst's own book with reasonable skepticism -- as a self-serving tale of little credibility or real insight. Nevertheless, It does seems as if he could have presented a wider and more detailed account of public events of the time to illuminate their probable effect on a young woman of her background. How would a very young person of her privileged, but rebellious personal history have been affected by such plausibly pertinent events of the early 70s as Kent State, Watergate, Nixon's resignation, the Munich Olympics hostage taking by Palestinians, the end of the Vietnam War, Attica, the 1972 bank robbery hostage incident depicted in the 1975 movie "Dog Day Afternoon," the Paul Getty kidnapping, etc.? Toobin gives the story of Patty Hearst some historical context, but more would have been helpful to make her zigzag trail of changing loyalties comprehensible.

More historical context would also have made other people's actions more explicable. Toobin does cite the apparent mass suicide at Jonestown in 1978 as affecting the changed receptivity of the public and of officials to a "brainwashing" defense of Patty Hearst. Still, Toobin's views on why her sentence was commuted by President Carter in 1979 seems unimaginative and historically barren -- that Hearst money got her case before Carter and then that the brief presented to Carter for her commutation left out critical facts from the trial -- by implication a result of presidential staff deference to the Hearsts' social position. However, Carter's commutation of Hearst's sentence to the 22 months of prison time already served looks a bit different when we recall -- as Toobin does not -- that one of Carter's most noted and controversial actions was granting amnesty to Vietnam war draft dodgers. (Furthermore, Hearst was in very precarious health, she was only eight months away from her first parole hearing, the commutation left her under stringent conditions and still on probation for a state sentence on shooting up a sporting goods store to enable the escape of another SLA member.)

In the absence of any way to get "inside a person's head," we might look to a searching account of historical and social context for some insight into that person's seemingly incomprehensible and disastrously self-destructive action -- huh, Jeffrey Toobin?!

Those of us of a certain age remember the kidnapping of Patricia Hearst. Jeffrey Toobin revisits that turbulent time in an interesting new book, “American Heiress: The Wild Saga of the Kidnapping, Crimes and Trial of Patty Hearst”. As the title suggests, it really was a wild saga. The 19 year old daughter of a wealthy and privileged family was kidnapped by a ragtag bunch called the Symbionese Liberation Army. They fancied themselves as revolutionaries, and after a few weeks of captivity, Patty decided to join the revolution. Amazing. It sounds like the plot of a bad Movie-of-the-Week. In retrospect, the tale of Patty Hearst seems like one of the last big, news-dominating events of the 60’s, even though her kidnapping didn’t happen until 1974. The chaos and tumult of the 60’s did not stop when the calendar changed to 1970. It was an unstable time and there were many acts of what would now be called domestic terrorism. To be clear, at first Patty Hearst was the victim of a brutal, terrifying abduction. Eventually, though, she became a willing member of the SLA. She wanted excitement and to be liberated from her boring family, her boring boyfriend, and her boring existence. She participated in serious SLA crimes and had many opportunities to go back to her former life. But she had no desire to do so, not until 19 months after the abduction, when she was caught and jailed. Jeffrey Toobin unearthed and embraced the details, then wrote the definitive account of one of the more unusual events in American history.

Was Patty Hearst a hapless victim under the stress of Stockholm Syndrome? Well, she was kidnapped, but she became a willing participant in a string of bank robberies staged by the Symbionese Liberation Army, so the answer is no. Did she know how to play the media when she was finally captured? Absolutely - and she and her family did. This book is a compelling tale of one of the most bizarre episodes of the 1970s, set against a time when America was extremely violent - to the point that an average of fifteen hundred terrorist attacks occurred every year. It also recounts the ridiculous food distribution program in San Francisco and Oakland the kidnappers demanded as "ransom," as well as the biggest police shootout in American history to that time. In addition to the main characters, the book also includes a rather odd collection of supporting players, including (but not limited to) Ronald Reagan, Joan Baez, Jim Jones, Kevin Kline, F. Lee Bailey, John Wayne - and Lance Ito. Patty Hearst may have "redeemed" herself in the strict sense of the word, but her crimes can never be forgotten - this book is an attempt to make sure they aren't.

Very much enjoyed this well-researched telling of the events surrounding the kidnapping of Patricia Hearst. I've read a bit about her before, so I already knew the basics, but Toobin added new information to my understanding. That said, I think his position about Hearst's role in the SLA and her motivation in joining them shows, and I didn't see it as entirely as fact with no opinion. Even so, it's a fascinating part of the counter-culture history of the 70's with lots for readers to think about

Well! Sure is different from Patty's account in Every Secret Thing which I read years ago, and bought into though I had questions, which've now been answered. She was not a victim except for the kidnapping part. What I think is she was looking for an identity and found it, temporarily, with the SLA. Otherwise she was a bit of a sociopath which author hints at though does not come right out and say as it would've been rude.

The fascinating and almost unbelievable story of Patty Hearst, the heiress to the Hearst fortune, who was kidnapped in the 1970s by the radical Symbionese Liberation Army. The crux of the Hearst story if whether she willingly joined them in their crimes or was brainwashed. Jeffrey Toobin, who has written about O.J. Simpson and the Supreme Court withhold judgement, but let's the facts speak for themselves. He situates Heart's kidnapping in the tumultuous political climate of 1970s California and in the curdling of the idealism of the previous decade. It is an incredible story and he tells it with intelligence, sympathy, and verve. Highly recommended.

I will never confuse the term Stockholm syndrome with The Patty Hearst story again.
In a careful, detailed and chronological fashion ,Toobin takes us through the Hearst kidnapping,to her arrest.
Along the way, against the backdrop of Jim Jones and the Guaynese massacre,and the violent culture of west coast 'radicalism',we take sides and then don't with Hearst .
In the end, we leave disgusted, as big money buys her not only a defence, but a pardon..the obvious contrast between her outcome and that of the majority of prisoners without money and resources is just so loud.