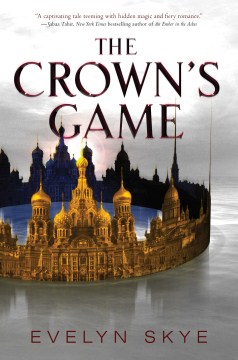 The tsar of Russia sets up a duel between the country's only two enchanters where the winner becomes the tsar's most respected adviser and the loser is executed.
Publisher: New York :, HarperCollins,, 2016
ISBN: 9780062422606
Characteristics: 1 online resource text file,rda
Additional Contributors: OverDrive, Inc. - Distributor

I really enjoyed this one! The contrast of the opulence of 19th century Russia royalty with the harshness of life for so many Russian citizens was something I didn't expect to experience, but I really love that it came through. On top of great characters and a swoony romance, there wasn't much to critique here.

Vika Andreyeva lives on Ovinchin Island, where she can watch Saint Petersburg across the water and learn about her magical gifts in peace with her father, Sergei. Nikolai is an orphan, raised by a cold mistress named Galina in the city with the sole purpose of developing his magical gifts. When the tsar initiates the Crown's Game, a fight to the death for the two mysterious enchanters living in Russia in order to determine which of them will become Imperial Enchanter, advisor to the tsar, neither one realizes who the other is. But a lot more than just their lives are at stake - their hearts are just as susceptible to disaster, and they are about to find out how much worse their emotions can make an already deadly game.

Vika stood out to me in this one as the heart of the story. She's fiery, strong, and smart, but she's also emotional, somewhat soft, and prone to acting rashly. I loved her dynamic with both Nikolai and Pasha SO MUCH. She never becomes the smitten girl, prey to her hormones, no matter the consequences. Both boys can be so swoony and though she felt it, I loved how she tempered herself, kept herself in check. I never rolled my eyes at her which is a feat for a YA fantasy heroine. (Don't get me wrong, I love a lot of them, but sometimes, they deserve the eye rolls.)

I also loved the perspective shifts of the book, but I felt like they could have been used differently in order to achieve the most shock value out of a couple of scenes. I liked getting inside so many different characters' heads, but particularly in the case of Aizhana, I wonder if she was necessary. It took a lot of mystery away early on and if that was dragged out more, if we only saw her through other characters' perspectives, I think it would have been all the more captivating and somewhat disturbing. The core three of Nikolai, Pasha, and Vika were great, but the rest I felt could have used some refinement.

And that was the case with the writing as well. I enjoyed it, for sure, but some of the dialogue got a little cringey, and sometimes, I felt a bit lost as to what was going on. The Game itself felt like this weird, nebulous thing all the way up until the first move, which was fine, but I also just had no idea what a move was even going to be. I think I wanted a bit more set-up, a bit more build-up, in order to make the payoff even greater. Because the creativity of the moves is wonderful, and I wanted to really get excited for them.

Along with great characters, though, Evelyn has also given us this gorgeous glimpse into an alternate 19th century Russia that truly sparkles. I felt the mood in each locale so distinctly, from the Island to Saint Petersburg to everything in between. It felt distinctly "historical", yet that magical edge really made it leap off the page to me.

Overall, I would recommend this one. I'll definitely be picking up the sequel and hoping that the little nit-picky things I've mentioned here are improved on, but even if they're not, I really do feel like I have to know how these characters' arcs are resolved. I'm invested, and that's a sign of great story-telling.

A Russian mystical tale during the Tsarist Napoleonic Wars, featuring a love triangle and a magical island.

This book tells the story of two enchanters competing to the death to be the imperial enchanter. The author also skillfully incorporated multiple story lines by using other characters' individual perspectives. There were many twists throughout and was impossible to put down until the very end. The author shared her love of Russia through this book, and although I've never been there, I felt as though I was right there in nineteenth century imperial Russia, witnessing the splendor of the magic and the grandeur of the capital city.

For fans of The Night Circus, Two enchanters must face off in Imperial Russia

This book is a total MUST READ.

This book was intriguing and I loved the Russian Magic History aspect of the whole thing. It left us on one heck of a cliff hanger which is frustrating but awesome at the same time. The character development was good and I enjoyed the magic in the world a lot. The plot wasn't that unique and yet I thought the tension and climax were well constructed. There are a lot of questions I still have so I want the second book, like now.

It's almost not fair to write a book about Russia in the time of the Tsars. It's a literary goldmine after the hubbub over Anastasia, the Lost Princess, a terrifying and haunting story about the royal family that I was completely enamored with growing up, and still to this day.

Skye did write an original story, however. This isn't a remake Anastasia, or even a remake Imperial Russia novel. She decided to take some creative control, and I am so glad she did. There are definitely ties to the enchantment thought to be surrounding Rasputin back in the early 1900s, so it is easier to believe this semi-fantasy story because it is not a completely new idea.

The characters are close to what you'd expect in this book, and a lot of the plot reveals the reader can see coming a mile away, but because of the well written story, detail, character/enchanter development, they are reveals you aren't too disappointed in!