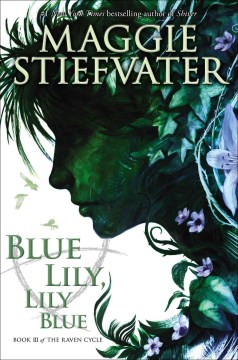 Blue Sargent has found things. For the first time in her life, she has friends she can trust, a group to which she can belong. The Raven Boys have taken her in as one of their own. Their problems have become hers, and her problems have become theirs. The trick with found things though, is how easily they can be lost.
Publisher: New York :, Scholastic Press,, 2014
Edition: First edition
ISBN: 9780545424967
0545424968

If The Dream Thieves was a novel to move players into place, Blue Lily, Lily Blue delivers on that promise in a big way. This entry was definitely the most frightening and suspenseful of the four novels. Blue and her boys make significant headway on their search for Glendower while the threat originally posed by The Grey Man is multiplied with new arrivals all in search of the Greywaren. And new threats appear from within as well; Noah's ghost seems to be changing, degrading, and sometimes is not even his to control.

But even with all of this going on, Blue Lily, Lily Blue is still a character-centric novel. Piper, the cranky, matter-of-fact killer may be the funniest of the lot, but it's our core group that keep the novel going. Stiefvater has a gift for writing characters that are completely individual, never sound like one another, yet are still capable of growth and change. Even if I hadn't been pulled in by the central mystery, the characters and relationships made me feel that I would want to inhabit this world and know these people, even if it was just for Piper to complain about how much work I would be to clean up before she shot me.

Another excellent chapter in the Raven Boys series. I just love Maggie's writing, these books suck you in and just don't let you go. Waiting for the last one is going to be torture as always.

The third book in the Raven Cycle series, Blue Lily, Lily Blue continues the epic story of a psychic girl and her friends on the hunt for a long-dead celtic king. The mood carries the misty tone of the previous book, while adding more mystery and intrigue. The pacing is quick and racing to each new event, keeping the reader excited and ready for more. I think the strongest aspect of this book was the continuation of the character development from the beginning of the series. Every character grew in natural yet dynamic ways, adapting to their circumstances as the world as they know it changes before their very eyes. Often times sequels get stale as a series goes on, but Stiefvater preserved the integrity of her series while still offering something fresh and compelling. Overall, I would recommend this series to anyone who loves a good adventure. 5/5
@nickreads of the Teen Review Board of the Hamilton Public Library

The tension! The angst! So stressful but so good

Cabeswater is back, fueled by Adam in his new role as caretaker of the ley line. Now, Blue, Gansey, Ronan, Adam and Noah continue their search for Glendower, and added to their search is the knowledge that Maura has disappeared into Cabeswater’s depths, seeking her former lover and Blue’s father Artemus. The seekers have a new ally in Professor Malory, a British ley line enthusiast and friend to Gansey, but they also have a new enemy, as the Grey Man’s Greywaren-seeking employer Greenmantle has come to Henrietta. Oh, and Gansey is still going to die in less than a year, and now Blue is in love with him. The race is on to save Gansey and wake Glendower, and there is a warning attached: Don’t wake the third sleeper.
The third in my favorite series. There is little to be said in this section of the review that I haven’t said in my reviews for Raven Boys and Dream Thieves. The great characters, plot, fantasy element, and writing style are as present here as they were before. Next up, the Raven King, the last installment of the Raven Cycle.

I have loved every one of the books in this series so far. I hope the Raven King holds up to expectations after the satisfaction of Blue Lily, Lily Blue. I really enjoyed finally getting to know the 300 Fox Way characters a little better and seeing the more complex relationships building between the adventurers is really good. This book had more of a cliffhanger than the previous two had, and it makes me grateful that I waited to read it until the fourth book came out. I just can't wait to finish this series! Definitely a series any strong female character-loving, fantasy-addicted, magic-loving kid should read.

4 Stars - I recommend if you enjoy YA fantasy and have read the other books.

This book picks up where the first one left off. The search for Glendower continues.

I like this book better than the others, there is a lot more focus on the relationships between the characters. I also feel like the action of the story is finally getting closer to the end goal... whereas the first two seemed a little bit "fight against people who are getting in your way.." I enjoyed learning more about the ladies in the story as well. This one left off on slightly more of a cliffhanger. Still not feeling the strong pull to keep going other than my own person preference to binge entire series.

The fourth book Raven Cycle was fascinating. I really like fantasy and psychics. Each character was clearly drawn. Stiefvater writes very well, drawing me in, seducing me into believing the most preposterous things. I couldn't wait for the next chapter and for the next book. I was very disappointed when I was notified that I would have to wait until January, 2018, for the final book and then very pleased when it arrived the day after I finished the third book.

Maura is missing, and the only clue that Blue and the Raven Boys have to go on is that she is somewhere underground. As the school year once again rolls around, Blue is left feeling incomplete and slightly lost, biding her time and feeling like there is nothing she can do. Adam works with Persephone in learning how to communicate with Cabeswater and how to help it. Ronan keeps disappearing to the Barns to try and wake hi father's sleeping dreams. And Gansey has called his fellow ley line hunter Malory to the States and continues his search for the lost Welsh king. Things start to get even stranger than normal when Noah begins to manifest in a haunting sort of way, when Greenmantle shows up at Aglionby as the new Latin teacher, and Blue helps to discover the existence of a cursed cave that may connect with Cabeswater, and may lead her to her mother.
This book is another roller coaster, seemingly slower than the first two until the final fifty pages, where you're left gripping the book in equal parts anticipation and horror.
Great read, the only reason I didn't give it 5 stars was because the writing sometimes got confusing and at times took away from the story (but not enough that the book wasn't still enjoyable)

“Go be short somewhere else.”

“I think it’s crazy how you’re in love with all those raven boys.” Orla wasn’t wrong, of course. But what she didn’t realize about Blue and her boys was that they were all in love with one another.

“They are basically monsters,” Greenmantle said, although now he was thinking less of the cows and more of his new pupils. “Accepting handouts all day long, but they’d eat you in a second, if they had the right teeth for it.”

Returning to his desk, he threw his feet up on it. This was forbidden, of course. He crossed his arms, tilted his chin back, closed his eyes. Instant insolence. This was the version of himself he prepared for Aglionby, for his older brother, Declan, and sometimes, for Gansey.

This weather reminds me of this dreadful climb I went on with this fellow Pelham,” Malory muttered, producing an umbrella from his person and sharing it with Blue. “Fourteen kilometers each way, and all for a standing stone that looked like a dog in certain lights. The man went on and on about football and his girlfriend - a terrible time was had by all.

"Two is a terrible number. Two is for rivalry and fighting and murder".
"Or marriage", Adam said, thinking.
"Same thing", Persephone replied.

Ravindersidhu thinks this title is suitable for 13 years and over

3je82rs9 thinks this title is suitable for 12 years and over

blue_zebra_1060 thinks this title is suitable for 12 years and over