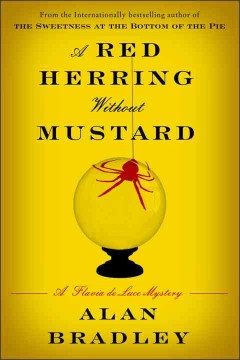 A Red Herring Without Mustard

Flavia's discovery of an old Gypsy woman who's been attacked in her wagon sends the girl off on an investigation that will reveal more of Buckshaw's secrets as well as new information about Harriet, the mother Flavia never knew.
Publisher: New York : Delacorte Press, 2011
Edition: 1st ed
ISBN: 9780385342322
0385342322

Such a fascinating read, and one of my favorite of the series!

Series recommended by Godsel. This is one I haven't read. Don't know if want to continue series.

Delightful Flavia is back to solve another mystery in her quaint English village of Bishop's Lacey. You'd think Inspector Hewitt would by now consult her directly upon learning of a crime having been committed. This installment was not quite as fun as her first two episodes, but I will definitely read on.

I admire the spunk of the main character, but I kept visualizing her as an older teen, rather than an 11-year-old. I want to read the initial book to get a bit more of her background.

It's always un to follow a precocious girl sleuth and you can't miss with this one. A good mystery too with great character development as nosey Flavia goes about town investigating. I'm a big fan of this author and this series.

Enjoyed very much, more so than the 2nd book in the series and moves me to continue with the next in the series.

3 1/2 stars. I find that when I walk away from a Flavia de Luce novel, I'm first excited, but then within a few days I've sometimes forgotten what the actual crime was and who did it. That can be a bad or a good thing, I suppose. Bradley weaves so much into these stories, that sometimes the crime feels like an aside. Just within this novel we have a clubbed gypsy, two bodies, a smuggling ring, a missing painting, and a secret religion. Of course, many of these are red herrings, but often given enough story time that the main thread is easily lost.

Why you should read it anyway: Flavia de Luce is a terrific character and despite the story's meandering, every little byway and side note are fun little trips into Flavia's world. This third installment really brought home the loneliness of Flavia's life. With her mother missing, and her father with his nose in a philatelist journal, Flavia and her two sisters don't attend school, but are left to fend for their own amusement and education on the ancient Buckshaw estate.

For her sisters, that often means finding new ways to torture Flavia. She seems to give as good as she gets, and often does things that she doesn't realize are hurtful, but then Bradley will throw in a line like,"the idea of burglars inside Buckshaw was unthinkable. That left Daffy and Feely. In an odd way I wished it had been burglars," and my heart hurts for Flavia. Also, in this novel Flavia makes a "friend" of the granddaughter of the gypsy and the way all of the de Luce's react gives us a little insight into how lonely ALL of their lives at Buckshaw are.

After all that I needed a murder or two just to cheer me up. Besides the mystery, Bradley always keeps me laughing with terrific metaphors like "Porcelain and I tore into our food like cannibals after a missionary famine." While A Red Herring Without Mustard may not be as filling as a missionary, it is certainly an amusing little meal with very little aftertase.

A Red Herring without Mustard was the first of the Flavia de Luce series I read, and I fully enjoyed the content. I found the novel to include many twists and exciting details that are especially enticing to a refined mystery reader's eye. Even Flavia herself is a lovable and relatable work of art to a reader of any age. Moreover, this series is easy enough (although perhaps a bit too mature for some middle schoolers) for high schoolers and mature middle schoolers to read, and challenges the reader to make predictions about the culprit of the book and connections between seemingly unconnected events in the novel. Alan Bradley's books are fun to read and excellent for any reader due to its face-paced plotline, and I believe those who generally enjoy the mystery genre, particularly admirers of Agatha Christie such as myself, will delight at the style in which the author writes, as it is both formal and complex like classics, albeit colloquial and down-to-earth like modern novels. There's even a Flavia de Luce fan club online for those especially dedicated readers of the series! I highly recommend this novel, and prequels and sequels to it, as they are indeed an adventure to behold.

Sometimes when I find an author who is new to me, I read a bunch of books that they've written. I loved the first Flavia de Luce. And I liked The Weed That Strings, so I was looking forward to Red Herring. I should have waited a bit longer before reading one after the other. I thought Red Herring lagged a bit. And I thought Flavia made some really ridiculous decisions, even for an 11 year old. Down from 4 stars to 3. I'll take a break and try more of Bradley's work later on.

In this, the third novel in the Flavia de Luce series, Flavia encounters a Gypsy woman at a church fair. After the woman is nearly killed, Flavia is drawn into an investigation of the disappearance of a child years earlier. Twisting and winding, a great Flavia mystery!

dachsie thinks this title is suitable for All Ages

Alan Bradley has invented possibly the most interesting detective since Poirot, complete with as unique a name, eleven-year old Flavia de Luce. She is interesting because of her twelve-dollar vocabulary, first-rate wit, and scientific mind (she has a penchant for chemistry and poisons in particular). She is believable because of the battles she has with her two older sisters, Ophelia (“with Feely it’s always best to employ the rapid retort”) and Daphne (“two-years older than me and already an accomplished co-torturer”). But far from being merely precocious, Bradley gives audiences reasons to empathize with Flavia – a distant father, a mother she never knew but hopes to become, and a desperate wish for respect and affection from the very sisters with whom she bickers – smart as Flavia is, she cannot tell when they are merely teasing, because like most sisters, they know exactly which buttons to push for maximum effect. Flavia retorts with her wits (calling them such names as “stupid sausage” and “unpleasant porpoise”), but this gives her the drive to be a heroine in her own stories, to ferret out the clues to local mysteries, and in this third Flavia novel, the crimes are two-fold: who would attack an elderly Gypsy, and who would murder the local troublemaker? And does either have anything to do with some missing antiques from Buckshaw, Flavia’s ancestral but fast-decaying home, or a near-forgotten religious cult called the Hobblers? Flavia’s imagination leads to self-flattering fantasies so she is always a little hurt when people do not respond like she hopes, and her eager mind has not the subtlety of older detectives, so she (and her audience) are prone to conclusion-jumping. But following red herrings throughout 1950’s village England with such a well-drawn guide is a lark, especially one with gifts for lively description and imagination.

“"Come on," I said, leaping to my feet and tugging at her arm. "I'll show you what ladylike young women get up to when no one is looking".