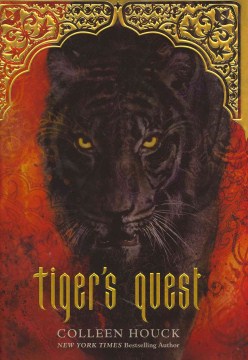 Tiger's Quest had such a sad ending! It was the first book that I actually almost cried while reading!

I first read these books when I was sixteen years old and I was totally into the cheesy love triangle. Since then, I have met my spouse of many years and he is from India (Telangana). I recently decided to reread these books, and I have to say that I enjoyed them much more the second time around!

Reading about Kelsey and Ren's cultural differences reminds me so much of the early days with my own hubbie. I totally thought that the author was exaggerating about a lot of things in Indian culture- especially how gentlemen-ly the brothers are. Let me just tell you, it is not an exaggeration. People in India still get arranged marriages. They have extremely limited contact with the opposite sex until their wedding day, and both the men and women are coached their whole lives about how to act after said wedding day with their spouses.

So the book: Is it cheesy af? Yes. But no more so than a Bollywood movie. More than anything, I love the imagination behind this book! Is it high quality writing? No! But you know what? That's ok because this book inspires you to dream and wonder about the world. Who cares if a comma or two is out of place? This book is just dang fun.

Okay, so I ship Kelsey and Ren. A bit more than I ship Kelsey and Kishan. Gosh this book was hard to read. All the way throughout I was jumping between the two like, "what is happening"? Sometimes I enjoy it when authors add new perspectives on characters, and other times it gets a bit frustrating. Overall, this book was written quite nicely. The language in it was okay, the concepts were fairly interesting, and it should be suitable for anyone above twelve years of age. I like how different Kelsey's reaction to her relationship was very different from Bella Swan's in New Moon, by Stephanie Meyer. I honestly think that this was more realistic, which gave a fresh aspect of love. 4/5 stars
- @Siri of the Teen Review Board of the Hamilton Public Library

Part of my most favorite series in the world
I heart Kishan!!!!
I heart Ren!!!!

The Tiger’s Quest is the second book in my favourite series, the Tiger’s Saga by Colleen Houck. In this book Kelsey has just broken the first part of the curse, and she is back in Oregon. Soon after she returns, Ren and Kishan show up and start to train her. They want her to be prepared for the danger that they are going to be facing in the second part of the curse. But, now they have another problem on their hands. Lokesh, the man who cursed Ren and Kishan, is now after Kelsey for the other part of the magical amulet that hangs around her neck. Unfortunately, he finds where they had been hiding and he attacks the three, but in the process Ren gets captured. Now, Kishan and Kelsey have to complete the second task of collecting the “airy prize” alone. They hope that gaining the second prize will help them rescue Ren from Lokesh. Throughout their adventure, they face many challenges and near death experiences. They learn that they must have faith and hope in themselves and in one another in order to rescue Ren and to complete the tasks ahead of them. I would rate this book 5 out of 5, and I also believe that The Tiger’s Quest is the perfect title for this book. Not only do they go on quests to find the gifts of Durga. But, in this book especially, they have to endure the quest to have faith and hope no matter what happens. When Kelsey went to meet Durga the second time, she met the Divine Weaver as well. The Divine Weaver told Kelsey that the quest in life is to find happiness. Also, even though the tapestry of your life looks ugly and is complicated at the moment; if you have faith and hope during the quest of your life, everything will turn out to be beautiful in the end.

This books not the best, the charcters are undeveloped and very fake. overall, the book was decent, but left SO much to be desiered.

This is the best book of the series XD

The book is slightly melodramatic and the descriptions of people leave a little to be desired, but the actual plot line is well done and introduces interesting ideas tying together multiple disciplines.

This book was just as good as Tiger's Curse, though I found myself missing Ren.

The library just added the next book....Tiger's Destiny. Better get on the list now!

i love this book, and the whole serie, it's beautiful, i could'nt put the book down. i love the author's work, she is amazing

Xtremely steamy! I find it too inappropriate and a horrible story. It is like Twilight, the Vampire Diaries, and Harry Potter! PLAGIARISM!!!

I felt sorry for Kishan in this book because he was looking to reach out to Kelsey for emotional attachment and she was all about saving Ren and only saying I be friend.

The series is interesting with the Indiaian mythology and tiger factor but I find still Kelsey boardering ok from to annoying, to corny to peppy.

Absolutely love the series!Couldn't put it down 'til the very end!

in the description, they sadly write Kisham instead of Kishan...get it right VPL! ur huge!

another spellbinding book much alike the first book but with so much more at the same time! couldnt put it down :)

For all those who loved books 1 &2 of this series, book three, Tiger's Voyage, is available in stores Nov. 11.

Sucess! The second book in Colleen Houck's series is fantastic! The stroy line continues and flows smoothly and she adds a few very unexpected twists. The ending left you breathless and totally in need of the third book. But we have to wait for November for that one! Hope you enjoy this book as much as i did!

I originally had this as 4 1/2 stars, mostly because, similar to the first one, it had some cheesy spots. I'm raising it up to 5 stars, however, because it's been a couple of weeks since I finished it, and I'm *still* thinking about it! This is one addicting series. Highly recommended.

i can't wait till nov 11. this series a fascinating